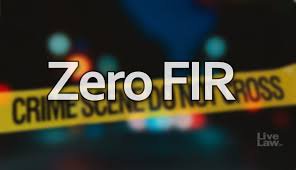 UNDERSTANDING THE CONCEPT OF ZERO FIR

FIR has not been defined in CrPC though it is understood to mean information received u/s 154 CrPC.

FIR is the first step to setting the criminal law in motion. It is the report prepared by police on the information given by the informant regarding the commission of a cognizable offence.

Section 154 empowers the following people to give information [1]

⦁ Relative of the victim

⦁ Some eyewitness or bystander

⦁ Anyone having information regarding the crime.

Purpose of registering FIR- Receive information regarding the commission of an offence at the earliest, without delay, without evidence being tampered with, facts being forgotten or embellishment seeping in, ensuring that the first version of the commission of offence comes on record.

FIR’s are recorded in a register. Each FIR is given a specific number. However, if the information is regarding some crime committed at a place that is not covered within the jurisdiction of that particular police station, then that information is recorded, but not numbered, thus it is referred to as ‘Zero FIR’. [2]

The idea of zero FIR was brought forth by the Justice Verma Committee report in 2013 after the infamous Nirbhaya case. Unlike popular belief, it was not newly introduced. Committee recommended an already existing concept in stronger words.

Every time any information of cognizable offence is received by the police, mainly two possibilities arise-

⦁ Or they begin an investigation into FIR and get to know at a later stage that they have no jurisdiction.

⦁ In the former, the police register a Zero FIR. And then transfer it to the appropriate police station which has jurisdiction.

⦁ While in the latter even if police steps forward with investigation their proceedings cannot be challenged on grounds of territorial jurisdiction as Section 156(2) CrPC states.[6]

In Satvinder Kaur v. State govt. of N.C.T. of Delhi. [7] It was held that the investigation of police cannot be challenged citing territorial jurisdiction. After the investigation is over if investigating officer concludes that the cause of action does not fall within his jurisdiction, then he will submit a report u/s 170 CrPC and forward the case to the magistrate who is empowered to take cognizance of the offence.

The above discussion makes it clear that it is the duty of the Officer-in-charge of the Police Station to register an FIR irrespective of the territorial jurisdiction, investigate and send the case to the appropriate Magistrate.

Section 190 CrPC [8] empowers the Magistrate to take cognizance of offences and it need not be within the territorial jurisdiction. Section 460(e) of CrPC [9] says that if a magistrate is not empowered to take cognizance under sections 190(1)(a) or 190(1)(b) CrPC and does so erroneously, such cognizance and proceedings thereof is not vitiated.

Hence, no provision of CrPC empowers police to abstain from their duty to register FIR.

Zero FIR is essential to safeguard and uphold the principles of justice. It establishes the faith of people in the functioning of the police. We cannot expect a common man to go find the jurisdiction within which his case falls before imparting the information of the crime. It is only obvious that a layman would not know the technicalities of jurisdiction. He would go to the nearest police station to lodge FIR. It is the duty of the police to assist him in the process and not get him entangled in the intricacies of the procedures and law. The police shall register FIR and then transfer it to the appropriate police station which has jurisdiction.

In the Asharam Bapu case [10] The Delhi police took prompt action, registered a zero FIR even though the crime took place in Jodhpur. The FIR marked as ‘0’ was then transferred from Delhi to Jodhpur Police station.

Zero FIR is essential to avoid unnecessary delay. The main idea is to initiate an investigation. In India, offences like rape, murder and other heinous offences go unnoticed or unregistered using jurisdiction as an escape, a lot of time is allowed to pass which results in a lack of evidence. Zero FIR restricts the concept of passing the buck.

Such an FIR also proves useful when a person becomes a victim of cognizable offence while travelling. He can go to any police station to register FIR.

Zero FIR ensures prompt action and easy access to justice. The discussion makes it clear that the police cannot refuse to register FIR. However, people in most parts of the country are unaware of the existence of the provision of Zero FIR. Awareness is the key. Refusal of registration of FIR is a dereliction of duty of the police officer which is punishable by law. Police regulate and maintains law and order in a city. They are the ultimate saviours of common men. A symphony between policemen and the public is required. Strict action must be taken against those who fail to perform their duty and refuses to register FIR.

Answer- The procedure to file zero FIR is similar to that of a normal FIR. Informant shall go to the nearest police station or whatever is conveniently accessible, he can give information either in oral or in writing. If oral, it shall be reduced to writing, if written, shall be signed by the informant. The concerned police officer will then record it in the register. In the case of Zero FIR, it will be numbered zero. Police will also provide a copy of the FIR to the informant free of cost.

[Author Amisha is a 2nd-year law student at Law Centre-1, Faculty of Law, University of Delhi.]