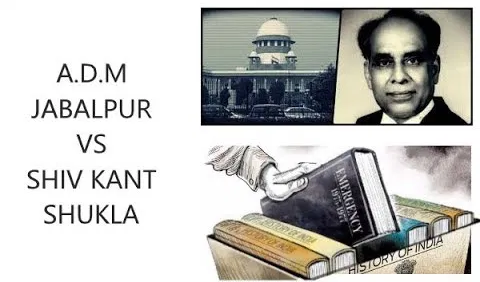 REMEMBERING JUSTICE H.R. KHANNA: A JUDGE WHO STOOD FOR FREEDOM

INTRODUCTION: DECLARATION OF EMERGENCY AND SUSPENSION OF FUNDAMENTAL RIGHTS

On June 25, 1975, the President of India exercised its power under Clause (1) of Article 352 of the Constitution and declared an emergency asserting there was an imminent threat to the security of Indian due to internal disturbances. The Part XVIII of the Constitution of India which provides for ‘Emergency Provision’ was initiated by the President.

1975 Emergency is known as the darkest chapter in Indian democracy as this was the first time the Indian government suspended the civil rights of citizens. This incident derailed the country to the non-democratic approach. There was an extreme curtailment of freedom of the press. Students, academicians, writers, journalists, anyone who opposed the government in this decision was arrested. This incident was tragic and thus, it is the darkest day of Indian politics.

On 8th January 1976, the President exercised the power granted under Article 359 of the Constitution. The President passed a declaration that the rights of citizens to move to court to exercise their rights mentioned under Article 19 of the Constitution and all the proceedings pending in the court under Articles 14, 21 and 22 will remain suspended during the period of proclamation of emergency, retrospectively from 26th June 1976. [1] Several detentions were made including detentions of eminent leaders such as Jayaprakash Narayan, Morarji Desai, Atal Bihari Vajpayee and L.K Advani who were detained without any charges or fair trial. Many writ petitions were filed in different parts of the country. Nine High Courts declared the decision in favour of these detainees stating that although Article 21 of the Constitution that provides for the protection of life and personal liberty cannot be enforced still the order of detention can be challenged as it was not in conformity with the Act and was mala fide. Further, against these orders, many appeals were filed in the Supreme Court. [2]

ISSUES OF THE CASE

ARGUMENTS ON BEHALF OF THE PETITIONER AND THE RESPONDENT

The main contention was that the underlying objective of providing emergency provisions in India was that the executive could discretionally implement the laws or circumvent the implemented laws of the country [5]. The other argument was that the State did not release the detainees even though there was no sufficient cause for detention which is a clear violation of Article 22 of the Constitution and the detainees were also not allowed to move to court for enforcement of their fundamental rights under Article 19 of the Constitution. [6]

They disagreed asserting that the sole purpose of Article 359 (1) of the Constitution is to remove restrictions on the power of the legislature [7]. They further claimed that the Maintenance of Internal Security Act (MISA), 1971 was in force for pre-trial detention. Article 21 cannot be considered as a sole repository of the right to life and personal liberty. [8] Moreover, they argued that the State and its officers have the right to arrest only if the detention falls under Section 3 of the MISA Act and the pre-requisites for the said Section are fulfilled. [9]

AFTER EFFECTS OF JUSTICE KHANNA’S DISSENT ON ADM JABALPUR CASE

Justice Khanna’s life changed when he took a stand in the Habeas Corpus case (ADM Jabalpur v. Shivkant Shukla) in the Supreme Court. The simple act of dissent led Justice Khanna to enter the records of history as Justice M.H. beg superseded him for the position of Chief Justice of India in 1977. He knew it would cost him his Chief Justiceship, but he stood by what was right. [16]

In January 1977, M.H. Beg, J. was appointed as the CJI by superseding his senior Justice Khanna; subsequently Khanna, J. resigned from the Apex Court. After his resignation Bar Associations all over India protested and took out black-coat processions, though to no avail. However, he was the last judge who was superseded in the history of the Supreme Court. The judiciary eventually was independent and the power of judicial appointments from the executive was taken away in the landmark judgement of the Advocates-on-Record case in 1993. [17]

THE RELEVANCE OF JUSTICE KHANNA’S DISSENT IN TODAY’S TIME

Justice Khanna resigned even after an eminent career in upholding law and justice during the most crucial challenges. In a country, where one can find the controlling arms of politics in major aspects of public life and people have lost faith in the country’s judiciary, it is people like Justice Khanna who provide hope in the bleak justice system. People like Justice Khanna take risks even at the cost of the position of Chief Justice of India to ensure that law remained above personal and political antipathy and serves the people of the country, not just its leaders. [18]

Nani Palkhivala’s book, which came out soon after the emergency was revoked, carried a full chapter on Justice Khanna titled, “Salute to Justice Khanna”. At one point in the chapter, he states that “Justice Khanna’s statue must be installed in every street and corner of the country for the yeoman service rendered by him for the cause of justice”. [19]

In December 1978, his full-size portrait was unveiled in his former court, courtroom number 2 of the Supreme Court. To this day, nobody else has had the singular honour of having their portrait put up in the Supreme Court during their lifetime. [20]

Q1. Why ADM Jabalpur case is popularly known as the Habeas Corpus case?

A1. The verdict in the ADM Jabalpur v. Sivakant is popularly known as Habeas Corpus (a writ requiring a person under arrest to brought before the judge or the court, especially to secure the person’s release unless lawful grounds are shown for detention)[19] case because there were numerous arrests under preventive detention law. Under this provision, the detainees could not claim their personal life and liberty through a writ petition of Habeas Corpus during the emergency period. [20]

[5] ADM Jabalpur: The case that was but should never have been <https://theleaflet.in/adm-jabalpur-the-case-that-was-but-should-never-have-been/> accessed in August 2020.

[11] 43 years since Emergency: A look back at HR Khanna, the judge who stood up to Indira Gandhi <https://www.firstpost.com/india/43-years-since-emergency-a-look-back-at-hr-khanna-the-judge-who-stood-up-to-indira-gandhi-365539.html> accessed in August 2020.