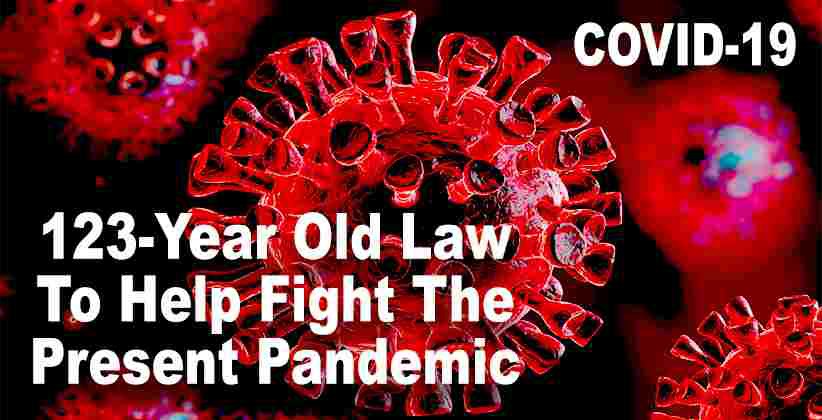 The Epidemic Diseases (Amendment) Bill, 2020 was passed in both the houses and got the assent of the President on the 28th September, 2020.  It amends the Epidemic Diseases Act, 1897.  The Act aims by prohibiting the spread of deadly epidemic diseases.  The Bill amends the Act to incorporate protections for healthcare workers combatting epidemic diseases and increase the powers of the central government to prevent the outbreak of such diseases.

The Amendment Bill extends protection to healthcare workers working on the frontlines in the battle against the COVID-19 pandemic. Previously, it was notified through an Ordinance by the Central Government in April 2020 in the wake of the COVID-19 outbreak in India. India recorded its first COVID-19 case in January 2020 and the government imposed a nationwide lockdown in later part of March 2020 when the number of cases was in hundreds. During the lockdown, only essential services and healthcare sector were allowed. This health emergency brought a situation unlike any other that the country has dealt with since the time of Independence. The highly virulent nature of COVID19 necessitated extreme social distancing measures in public, besides quarantine and isolation for infected individuals.

Consequently, Central and State governments invoked the National Disaster Management Act, 2005 and the Epidemic Diseases Act, 1897 in order to impose measures to curb the spread of the disease. Even as these measures were being instituted, the stigma surrounding COVID-19 patients was spreading almost as fast as the virus itself. Soon after incidents of prejudice and ill-treatment of COVID-19 patients were being reported from all over the country. Frontline Workers were at the forefront of the crisis were met with hostility because of their proximity to patients. Also, in some cases they were violently abused or tortured while on duty.

The Amendment Bill brings in provisions that criminalize and punish any attack on healthcare professionals or their property. It defines a healthcare service professional as a person who comes into contact with infected person during the course of performing their duties to curb the epidemic and so, is at risk of getting infected by the disease. It specifically identifies

⦁ public and clinical healthcare providers such as doctors and nurses

⦁ Other persons designated as such by the state government.

The Amendment Bill also inserts section 3B under which it prohibits acts of violence against healthcare personnel or causing any damage to the property of healthcare personnel in which they have a direct interest. Any act in violation of these prohibitions would attract a penalty of Rs. 50,000-Rs. 2,00,000 or an imprisonment for a term of six months to seven years. The government had to take a step in interest of the font line workers, so had to introduce this Amendment Bill in reply to various incidents of attacks on healthcare personnel involved in testing and treating COVID-19 patients. As the COVID-19 advanced in India, so did the stigma attached with it.

Misinformation and lack of understanding about how the disease spreads led to the ostracization of suspected infected individuals and the doctors and other healthcare personnel who were at the forefront treating patients. After getting to know numerous such instances in the initial days of the nationwide lockdown, the Indian Medical Association (IMA) demanded that the government should introduce a law on an urgent basis to criminalise ant kind of attacks on medical practioners who are acting as front line workers. So, the government issued the Ordinance in April 2020.

The Amendment Bill seems to suggest that physical violence and property damage are the only significant threats facing medical professionals on duty. Notably, these professionals face a much greater risk of physical harm from actually contracting the disease while treating patients. This could be prevented by ensuring that they have easy access to protective gear like PPE Kits while treating patients. The Amendment Bill has no say on this facet of protection of medical professionals.

In April 2020, a Public Interest Litigation (PIL) was filed in the Supreme Court by a doctor seeking that the Court will ensure the availability of Personal Protective Equipment (PPE) for medical professionals. The Court observed that healthcare personnel had to endure unusual occupational hazards. It further provided that the central government has to ensure the availability of appropriate PPE kits for doctors, nurses and any other person treating COVID-19 patients. The order came on April 8, days before the Ordinance was passed and yet there was no mention of protection equipment was made in the executive order.

When the Amendment Bill was presented in Parliament, MPs also pointed out the multi-faceted threats that medical professionals faced "acts of violence from the inside," lack of safety and hygiene, lengthy and inhumane working hours, delay in payment of salaries, cost of treatment in case of contracting the epidemic disease in the line of duty, etc. Nonetheless, the Amendment Bill was passed as it is and failed to address these shortcomings on the part of State machinery in protecting the frontline workers, particularly those in the healthcare sector. Criticism in both Houses of Parliament pertained mainly to its oversight in providing a more comprehensive framework for dealing with epidemic situations.

These concerns pertain to inclusive coverage of essential workers, including sanitation workers and Accredited Social Health Activist (ASHA) workers, provisions concerning government collection, dissemination, public notification of data pertaining to the spreading of the diseases as well as effective models of management devised by States or the Centre, provisions regarding funding salaries of healthcare service personnel as well as allied service providers, provisions pertaining to the compensation of workers retrenched owing to the lockdown conditions, fiscal bailouts and stimulus packages for individuals and enterprises suffering due to the lockdown, prosecution of persons hoarding essential goods, addressing the high price procurement of essential medical equipment, as well as provisions of funds to the State Governments to manage the epidemic. In short, it appears to be that what has been accomplished through the Amendment Bill of 2020 was necessary in view of the increasing stigma and attacks against healthcare professionals. As seen in the definition clause introduced by the Amendment Bill shows that the “healthcare service personnel” are meant to include persons carrying out duties in relation to epidemic related responsibilities and who may come in direct contact with affected patients risking infection and spreading the epidemic. Till this, the definition is fairly broad and would include all healthcare professionals, allied health workers as well as sanitation workers across the board. However, the definition goes on to narrow the definition with an inclusive list limited to any public and clinical healthcare provider such as doctor, nurse, paramedical worker and community health worker; any other person empowered under the Act to take measures to prevent the outbreak of the disease or spread thereof; and any person announced as such by the State Government, by notification in the Official Gazette.

At the same time, it must be kept in mind that “List I-Union List” squarely covers the subject of “interstate migration” and “inter-state quarantine” justifying the provisions laid down under section 2A of the Amendment Bill of 2020. Sections 3 to 3E of the Amendment Bill of 2020 which frame the penalty provisions, with sections 3B to 3E specifically regulating the penalizing, by way of imprisonment as well as through imposition of fines, of any person committing an act of violence against a broadly defined class of healthcare service personnel. Legislating on this subject matter has also been affirmed to be an expropriation of State function by the Centre by several Members of Parliament.

Prevention of Violence and Damage to Property Acts, specific to medical service personnel’s, already exist in several States such as Karnataka, Maharashtra, Rajasthan, Tamil Nadu, and West Bengal. These Acts contain provisions relating to penalties, by way of imprisonment and fines, in case of attacks against medical professionals. The terms of imprisonment and the quantum of fines in these State Acts and the Amendment Bill are different and it is unclear how the divergence between the two would be addressed.

It is not clear whether fines would be collected in the State exchequer or the Central exchequer. Also, the provisions contained in the Amendment Bill echo the provisions of a prior Bill published by the Ministry of Health and Family Welfare in the month of September 2019 for public consultations. However, the Bill was never introduced in the Parliament owing to concerns of the Ministry of Home Affairs itself that special protection to healthcare service personnel was not required in view of the subsisting provisions of the Indian Penal Code (IPC) and the Criminal Procedure Code (CRPC) which were deemed to be sufficient to address the increasing incidents of violence against healthcare service personnel. Grounded in this backdrop, the claim of State representatives regarding the overreach of the Central Government into the State List finds some legitimacy. There is a larger point to be made here regarding the lack of a legal framework to deal with public health emergencies in India. The COVID-19 outbreak was met overwhelmingly with law-and-order measures rather than public-health measures. Ideally, a public health legal framework would account for all the aspects of the public health emergency including health, sanitation and law and order.

Q1) what does the term epidemic disease mean?

Ans.) An Epidemic is a disease that affects a large number of people within a community, population, or region. Eg. COVID-19.

Q2) What was the need to amend the existing Epidemic Act?

Ans.) Due to COVID-19, there was a surge in cases relating to attack on healthcare professionals or their property so this brings in provisions which criminalize and punish such acts.

Siddhartha Shankar Ray, “The Epidemic Diseases (Amendment) Ordinance, 2020: An Ordinance that hit the nail on the head,” Bar and Bench, May 23, 2020, available at https://www.barandbench.com/columns/anordinance-that-hit-the-nail-on-the-head-epidemic-diseases-amendment-ordinance-2020.

Simrin Surir, “There is a law to protect doctors from the assault but this is why it doesn’t work”, The Print, June 14, 2019, available at https://theprint.in/india/there-is-a-law-to-protect-doctors-from-assault-but-this-is-why-itdoesnt-work/250217/.