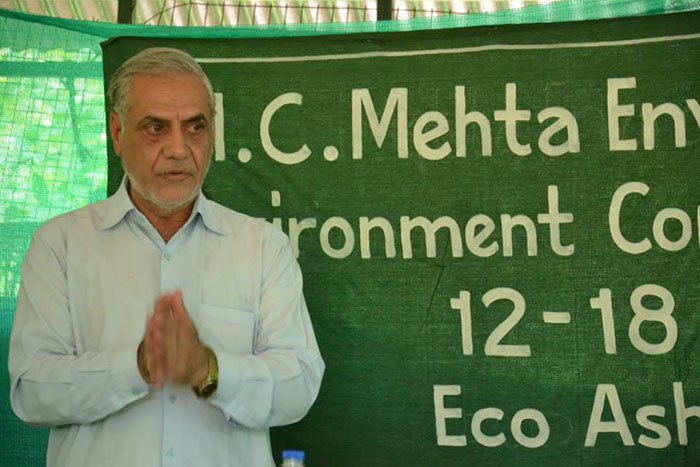 How MC Mehta Led The Formation Of Jurisdiction On Environmental Laws In India?

The author Shraddha Sharma is a law student. She likes being in solitude and feels that writing, reading becomes an addiction when you feel comfortable with books.

The fundamental duties within the Constitution of India mirror the requirement for security and preservation of the climate and reasonable utilization of regular assets. The Constitution under Part IVA (Art 51A-Fundamental Duties) forces an obligation on each Indian resident to secure and improve the common habitat, including timberlands, lakes, waterways, and untamed life, and to have regard for living things. Besides, under Part IV of the Constitution of India (Art 48A-Directive Principles of State Policies), the State will attempt to secure and build up the climate, and to protect the nation's woods and natural life.

Mahesh Chandra Mehta is an environment lawyer who lobbies for a more advantageous climate and has won honours for the equivalent. The Magsaysay grant jury has referred to him for "asserting their protected right to a spotless and sound climate for present and future residents of India." He forced polluters to pay for it and asked India's media to tolerate ecological messages. Mehta campaigned for and advanced utilization of sans lead fuel in India's four biggest urban areas, the safeguarding of the Ganga and Beas River from plant released effluents and a few other natural dangers.

Mahesh Chandra Mehta is an Indian public-interest lawyer. He finished auxiliary secondary school at Rajouri High School. He moved to Jammu University to get a degree in Political Science and Law subsequent to finishing his advanced education at Rajouri. He started rehearsing in Jammu and Kashmir High Court subsequent to graduating in Law. He has been effectively associated with social and political issues, raising his voice against foul play, and motivating understudies and youth to face separation in Jammu.

He moved to Delhi in 1983 and from that point began his profession as a Supreme Court legal counsellor. He started focussing on natural cases. Since 1984, he without any assistance won a few milestone decisions from India's Supreme Court, including the presentation of sans lead petroleum into India and the decrease of mechanical emanations that dirties the Ganges and disintegrates the Taj Mahal. In 1996, he was granted the Goldman Environmental Prize for his continuous fights against contamination causing ventures in Indian courts. In mid-1984, M.C. Mehta visited the Taj Mahal unexpectedly. He saw that the marble of the acclaimed landmark had turned dark, and was recoloured by foreign substances from close by manufacturing plants. This prodded Mehta to record in India's Supreme Court for his first ecological case. He additionally got the Ramon Magsaysay Award for Asia for Public Service in 1997. The Government of India granted him the non-military personnel honour of Padma Shri in 2016. He is likewise a trustee of People for Animals.

Role in Environmental Jurisprudence in India

The turn of events and movement of environmental law in India has been significant. Indian Constitution is one of the ninety Constitutions on the planet having a particular bit of enactment and arrangements for the security, advancement, and conservation of the common habitat. Aside from different reformist enactments, the function of the Indian legal executive is of principal significance. Right now, the vast majority of India's natural exercises are under Articles 32 and 226 of the Constitution. The legal composing strategy is best preferred over the customary suit since it is simple, similarly cheap, and offers direct admittance to the nation's best courts. All through the ecological case, the Supreme Court's forces to give bearings under Article 32 and the high courts under Article 226 have gained more prominent criticalness.

The Supreme Court of India in its milestone judgment of Subhash Kumar v. Condition of state made the underlying strides for consolidating a contamination-free climate under the expandable vision of Article 21. The Supreme Court expanded this choice on account of M. C. Mehta v. Association of India, by presuming that life, general wellbeing, and nature is qualified for a need over the state and rustic budgetary condition. Equity Kuldip Singh in Vellore Citizens Forum v. Association of India case, the idea of supportable improvement was applied without precedent for India. It was this judgment wherein the rule to remember a standard international law inside India for the natural statute was embraced.

MC Mehta's gathering of cases mirrors the privilege to a compassionate and solid climate. The principal MC Mehta case expanded the meaning of the option to live and restricted dangerous mechanical practices with the objective of ensuring individuals' entitlement to live in a protected climate. There were a few upgrades in the second instance of MC Mehta, notwithstanding, the third instance of MC Mehta built up another law of obligation to the contamination casualties brought about by an industry occupied with dangerous and possibly hurtful practices. The fourth instance of MC Mehta concerned the tanning businesses arranged on the banks of Ganga supposedly contaminating the water. The Court provided them requests to make emanating plants within a half year from the date of the request. It was expressed that the inability to do so would bring about the organization being cut off. The four MC Mehta cases preceded the Supreme Court on the activity of the public-lively legal counsellor under Article 32 of the Constitution. He documented claims for individuals influenced or prone to be influenced by any activity or inaction in the interest of those.

India has a prominent normal heritage that is owed to its biodiversity. There was an away from the arrangement for forestalling the pulverization of the country's considerable biodiversity. The Courts have been effective in accomplishing this point. In Andhra Pradesh, Pollution Control Board v MV Nayudu the Supreme Court framed the nexus between normal assurance and common freedoms. On account of the Rural Litigation and Entitlement Kendra versus the State of U.P., (Popularly known as Dehradun Quarrying Case), the option to live in a protected climate was perceived as a feature of Article 21 of the Constitution. In M.C. Mehta versus Association of India, (Popularly known as "Oleum Gas Leak Case") – Under Article 21 of the Constitution, the Supreme Court perceived as a major aspect of the crucial right to daily routine the option to experience in a contamination-free climate. What's more, the P.A. High court, in T. Damodar Rao versus S.O., Municipal Corporation, Hyderabad explained that the option to live in a sheltered climate was explicitly expressed under Article. 21. The privilege to climate is frequently connected with common freedoms. The privilege to life is ensured as a principal directly under article 21. To carry on with a solid life, our current circumstances and environmental factors ought to be sans contamination and clean. In this way, the legal executive in India has expanded the extent of Article 21 by adding the privilege to a spotless, secured, and adjusted atmosphere. The Supreme Court held class activities under Article 32 and the High Courts under Article 226 of the Constitution as a feature of procedures in the public enthusiasm for a crucial right to a protected climate. The Supreme Court is expanding the particular real plans for environmental protection to fill in the openings where there is the tastefulness of the sanctioning. From the above-talked about cases and the standards developed from them, we reason that MC Mehta has contributed enormously towards the ecological laws in India through enlarging the extent of the crucial right to life ensured under Article 21 of the Indian Constitution.