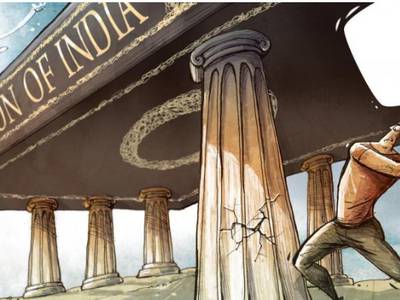 When the soul of India finally found a distinct and independent utterance on 15th August 1947, Nehru encapsulated the dreams of millions in his “Tryst with Destiny” speech. Vacant of poverty, devoid of caste prejudices, untouched by ignorance and narrow-mindedness, religious freedom and equal protection to all was the dream of the 21st century India. How far have we progressed towards the dream? Sir Kenneth Wheare proclaimed it as “the biggest liberal experiment in the democratic government”. The fact that it still runs unfractured in a country with a religiously and culturally diverse population of 1.2 Billion might be the greatest achievement in the history of democracy. Nowhere else in the world and never before in the history, has one-sixth of the human race existed together as a single political entity, as remarked by Nani Palkhivala. Though while glorifying one’s achievement, one must not sweep mishaps under the rug. The late twentieth century almost witnessed the death of Indian democracy, economic catastrophe and the birth of judiocracy. This article will shed light to how the relation of democracy with politics, economy and judiciary evolved and where are we now in 20 years of 21st century.